CALL FOR PAPERS: Epidemics are usually conceived of as sudden, devastating events against which there is no defence. Other features common to all descriptions of epidemics include a sense of seclusion, loneliness and deprivation, an altered perception of the physical world and of its symbolic topography, changed attitudes to human relationships, relegation to oblivion of practices considered holy, such as the burial of the dead, the inability of scientists to find a remedy or a cause, the folly of those in public power and of their provisions, the invention and persecution of scapegoats, or of criminals supposed to spread the contagion, the moral degradation which accompanies the disease, etc.

The Black Death which struck all the countries of Western Europe so harshly in the mid-fourteenth century determined deep social and economic changes. The huge mortality it caused led to a drastic reduction in the supply of manpower and governments tried to prevent rises in the cost of labour by means of legislation forcibly keeping down wages. The English laws on beggary and those on wage restrictions are what Karl Marx called ‘the bloody legislation’. David Herlihy has noticed the ‘social fissures’ which followed epidemics, and argued that the Black Death ‘in the long run, threatened the quality and continuity of cultural traditions’; while Marc Bloch characterized the plague as a psychological event, one whose ‘moral effects are to be explained only by the peculiar propensities of collective sensibilities’.

In narratives of epidemics, a number of patterns recur. The spatial models determined by pestilence are especially interesting for the symbolic issues they raise. In the first place, plagues are never thought to originate among ‘us’, ‘us’ being opposed not only to the geographically distant, but also to the socially extraneous. Contagion comes always from beyond the confines of our physical and cultural world, usually an undefined ‘east’, and has been brought to ‘our’ community by strangers. On the other hand, the perception of the traditional symbolic meaning of space is reversed: the ‘inside’, which is naturally, as well as culturally, considered the safe space, as opposed to the unknown and menacing ‘outside’, becomes itself threatening: once it explodes, the plague reigns within the confines of the city or village, and is especially alarming inside closed houses, where the presence of any sick person condemns the others to die by contagion. It should also be noted that narrative models of plague epidemics usually employ a mixed form, oscillating between truth and fiction, between document and anecdote. In Boccaccio’s Decameron, true facts (although interspersed with fiction and superstitions) are the occasion and framework for the creation of one of the most famous story books ever written; while Defoe, in his Journal of the Plague Year, presents the chronicle of a real plague, but intersperses the narration with fictional characters and events. Religious causes, medical theory, actual observation of symptoms and invention of remedies are among the other paradigms governing plague reports.

Other modelling features concern the envisaged aftermath of the pestilence. That the plague would change our behaviour and ways of life for the better is usually anticipated while the contagion is raging, but writers have often noted that, once spent, people return to their usual, morally confused modes of behaviour.

The metaphorical uses of the plague, usually dictated by moral evaluations, are endless and particularly creative in the early modern cultural context. Certain categories of people (strangers, prostitutes, Jews, mendicants, players, sodomites, the insane, etc.) were thought to be both morally and epidemiologically responsible for the disease: they were themselves ‘plagues’ to be removed from the society of good people. Accordingly, rituals of confinement and exclusion and many provisions for moral cleansing were devised to protect the social ambience from the socially extraneous, the deviant and non-conforming. In addition, certain activities were assimilated to pestilence: one of these was the theatre which, in Elizabethan England, generated the alliterative equation ‘plays-plague’.

In the popular mind awareness of the lack of any medical cure led to the devising of all sorts of remedies and healing practices meant to at least alleviate some of the plague’s symptoms, but first and foremost among remedies was repentance and prayer: well into the eighteenth century, plagues were thought to be the Lord’s punishment for sins. Many passages in the Bible threaten with plague and diseases those who will not hear the voice of the Lord, or forsake observance of the law of God (see for example, Leviticus 26:21; Deuteronomy 28:58-63, 29:22-26; Exodus 9:15; Numbers 16:46; 2 Samuel 24:15), and many early modern Christians manifested repentance of their sins and sought forgiveness by mortifying their flesh, as in the Flagellants movement.

The circumstances we are now experiencing as a result of the spread of Coronavirus all over the world, motivate us to publish a volume devoted to the cultural impact and significance of epidemics in early modern Europe. The Journal of Early Modern Studies is therefore calling for contributions and reflections on this topic and related issues. The range of kinds of text dealing with the plague is immense, and so are the perspectives from which the topic can be viewed: theoretical, historical, literary, religious, sociological, anthropological, psychological, medical, symbolic, popular, linguistic, economic, demographic, and so on. We welcome contributions from all these as well as other perspectives, encouraging special attention to the impact of epidemics on the culture(s) of early modern Europe.

This project will be developed as an open laboratory or ‘work in progress’ with contributions shared and promoted promptly and a special peer review process devised in order to speed up publication.

In order to speed up the whole process, we have set three different deadlines for submission

– 31 May 2020: submission of proposals and working titles to the editors

– 2 August 2020: submission of proposals and working titles to the editors

– 4 October 2020: submission of proposals and working titles to the editors

– 2 November 2020: submission of articles to the editors

The articles accepted and published according to the deadlines will be then collected in a supplement of JEMS (Quaderni di JEMS), edited by Donatella Pallotti and Paola Pugliatti, which will be published online at the beginning of 2022. 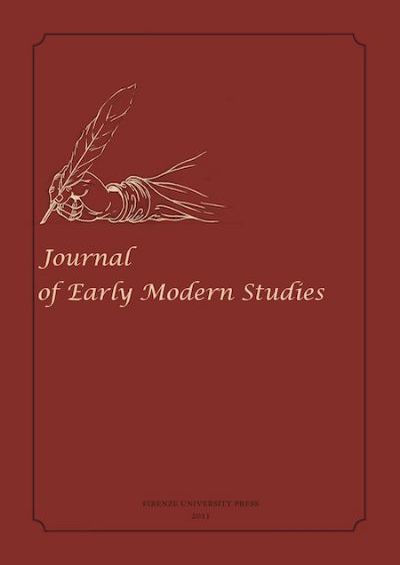