CALL FOR PAPERS: The present call for papers aims at gazing towards the hiatus between these new kinds of human interactions and the expectations linked to communicative habits. Consequently, it aims at catching the pandemic’s implications on communication, modes of intellectual transmission, art, proxemics and circulation of ideas.

There is no emphasis in stating that the wildfire-like spreading of the COVID-19 pandemic has suddenly changed every aspect of human social life as we know it. Habits, models of organization, socio-political dynamics and economic assets are portrayed in all their frailty within an ever-new shape of «fear», whose overcoming strategy translates into a call to safety and unity paradoxically demanding for distance and separation.

Back in 2016, in Vol. 9(1), Aisthesis focused on the “Aesthetics of streaming”, unknowingly – yet not unconsciously – anticipating one of the main topics at stake these days, that is distal interaction, transmission, fruition and creation. This aspect, eminently brought to evidence in the context of pandemic contagion, leads to a reorganization of fundamental categories of the aesthetic experience: contact, proximity and distance.

The present call for papers aims at gazing towards the hiatus between these new kinds of human interactions and the expectations linked to communicative habits. Consequently, it aims at catching the pandemic’s implications on communication, modes of intellectual transmission, art, proxemics and circulation of ideas.

The main topics of interest would be:

– The relationship between aesthetics and memetics: what impact social restrictions have made with regard to viral circulation of ideas and feelings, what was predicted by the paradigms of evolutionary aesthetics and how could they hold convincingly through the aftermath. Which consequences – if any – shall we expect about viral circulation both assumed under its bio-pathological sense and as a paradigm of cultural transmission?

– Implications on Aloïs Riegl’s distinction (made in his 1901’s masterpiece Late Roman Art Industry) between optic and haptic. Now that the tactile becomes optic, do we not see a reversal of the situation predicted by Walter Benjamin with the interpenetration of optical and tactile in the era of technical reproducibility towards a dilation of the optical with regard to the tactile?

– Aesthetics of proximity and distance: drawing from the aforementioned «optic-haptic» couple, what should we legitimately expect from each path? Could our whole aesthetic experience be re-configured according to a distal, disembodied approach?

– Embodied cognition: is such paradigm as a whole about to encounter its ultimate benchmark? How would contemporary aesthetics translate within the framing of limitations of movement and physical aggregation such as the quarantine measures imposed by national governments? Perhaps radical limitations to this model are up to come?

– Having surely created new habits in everyday life, could it be said that the pandemic might have generated unedited practices in aesthetics too? And if so, how do they relate with the categories of distance, proximity and contact?

– Which kinds of art and artworks should we expect in such context?

– Hito Steyerl’s defense of the poor image within webcasts and in light of “lo-fi” art: in 2009, the German artist Hito Steyerl claimed compressed, low-resolution and multi-reworked images should be awarded their own status as pictorial means vindicating accessibility over quality. The downgrading of audio-visual resolution during the pandemic has allowed a wider availability of data albeit often resulting in still images, pixelated screenshots, fractured speeches and awkward backgrounds. Could this have given to the hidden path of “lo-fi” art its ultimate spin in the direction of “iconicity”?

– Furthermore, to what extent could it be said that the act of freezing otherwise fleeting and unnoticeable facial and gestural expressions elevates such shots to the category of actual photography? Would this strengthen once more Walter Benjamin’s views while also becoming witness of truth in the displaying of moods often significantly different from those elicited in the real-time conversation?

– About the recognition of new forms of artistic communication, entertainment and spectacularization (from theatres to home shows): for paradoxical as it might sound, could it be that the prohibitions of leaving home may have resulted in an opening of the interiors? How does the perception of the relationship between outside and inside change at the times of Corona Virus?

Submissions should be made through the usual mask at: https://oajournals.fupress.net/index.php/aisthesis/about/submissions .

See all the details here: https://journals.fupress.net/call-for-paper/aesthetics-in-time-of-contagion/

Given the daily updates on the evolution of the pandemic’s implications, the selected contributions will be subjected to a special and faster peer review process and will be published online as Just Accepted articles after the completion of the revision processes. 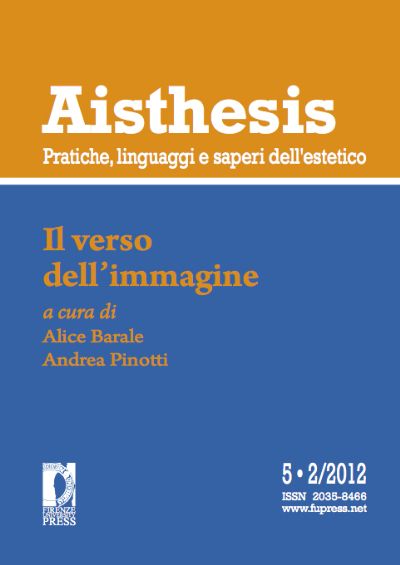