The Journal of Plant Taxonomy and Geography is a peer-reviewed journal on Plant Systematics, Nomenclature, Phylogeny, Phytogeography and Paleobotany

Riccardo Maria Baldini, the Editor-in-Chief of the Journal of Plant Taxonomy and Geography (Webbia) talks about the journal.

Webbia is going back home

After 6 years of intense and fruitful collaboration with Taylor & Francis, Webbia – Journal of Plant Taxonomy and Geography changes its Publisher and lands with Florence University Press, the Publisher of the University of Florence.

We can say that “Webbia is going back home“, but definitely enriched by an experience editorial internationalization, thanks to the prestigious English Publisher Taylor & Francis.

Back “home” does not mean turn in on themselves! Quite the contrary, it assumes a significant importance due to the increased responsibilities acquired in recent years. When Webbia began its adventure with Taylor & Francis in 2013, it was facing the evident and relentless international competition, and after six years we can say that we have won the initial challenge, although there is still a long way to go.

Webbia was born in 1905,  and from its beginnings it revealed its international vocation thanks to milestones of scientific production in Plant Taxonomy and Geography like the contributions of Tropical Botany by Ugolino Martelli — its founder— and by Odoardo Beccari — whose centenary of death is being celebrated this year — which are still admired by specialists of Pandanaceae and Arecaceae. Despite a short period of “scientific provincialism”, in recent years Webbia has regained its initial pride by rediscovering its initial vocation, i.e., to be a medium of international scientific communication.

Now a new chapter begins in Webbia’s life: trying to consolidate international visibility, competing with other prestigious magazines, maintaining a high level of scientific contents are the goals. It is not an easy task, indeed a very difficult one. We are aware that the frenzy, or rather compulsive desire to speed up publication of scientific works and the search for bibliometric evaluations affects the scientific research also in the field of Plant Taxonomy, often establishing an uncontrolled competition at the expense of the quality of the scientific message. For this reason, the experience that is about to begin makes us aware of the responsibility we are taking on. Hence the need to pay even greater attention to the quality of the Peer Review Process in order to obtain mutual benefits.

With this new chapter, Webbia, Journal of Plant Taxonomy and Geography, expands its editorial offer, publishing not only articles, but also introducing specific sections dedicated to Points of Views, Reviews, Letters, Communications, in addition to the possibility of hosting files dedicated to Congresses, Symposia, and celebratory events in general. The aim is to enlarge Webbia’s audience and to stimulate the new generation of Plant Taxonomists.

Moreover, with the new Publisher Webbia becomes Open Access. Authors will be asked for a charge, which is nonetheless modest compared with the charge requested by other open access magazines. Indeed, Florence University Press is a non-profit publisher, among whose declared goals is to make scientific dissemination easy and cheap.

In conclusion, taking into account its history in the botanical publishing scene worldwide, its previous and current diffusion, what awaits Webbia is an increasingly demanding task that, we hope, can be fulfilled thanks to the attention of those who have supported it so far and those who will join it from now on. Therefore, thanks to Taylor & Francis, who allowed us to start our challenge in the twenty-first century and improve our expectations and skills, and to those who have believed in us in recent years, showing interest and trust. We are confident that with the professionalism of Florence University Press we will be able to do even better, and improve the role of Webbia in the international scenario of Plant Taxonomy and Geography. A new era is coming up!!! 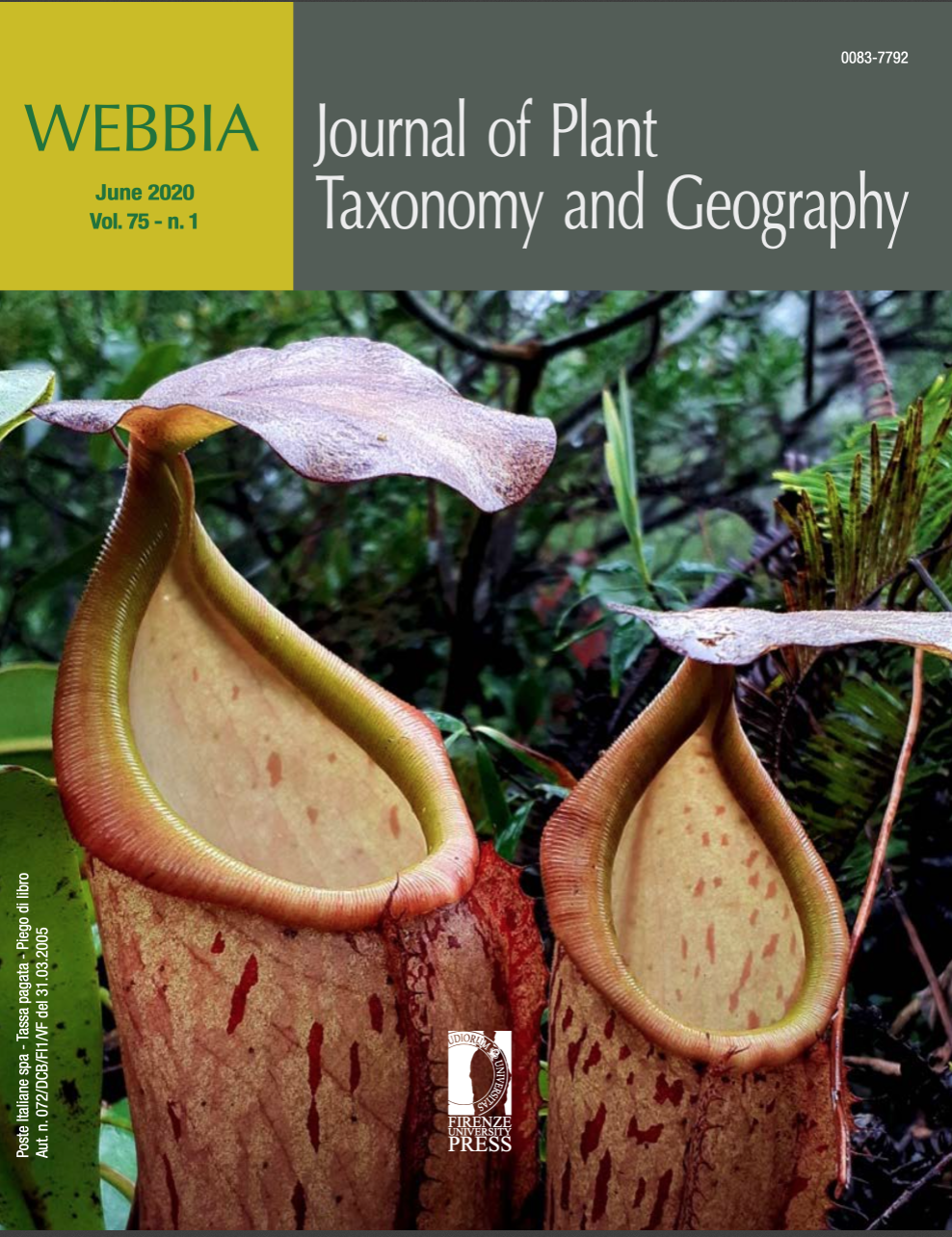